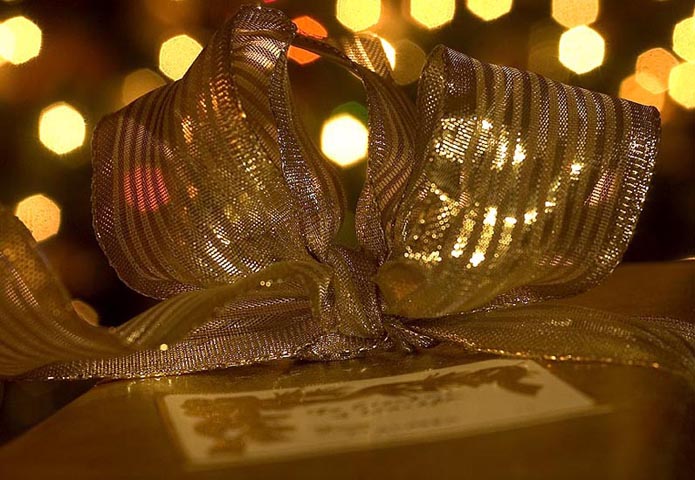 The presents are wrapped and I am headed to Mobile tomorrow afternoon.

I wasn’t able to purchase the kinds of things I would have liked, but I was grateful to have enough money to buy my mother and grandparents a few nice things. Because my grandparents do not have cable television, they are subjected to the basic network programming that caters to the lowest common demoninator. They love Westerns and classic television shows, so I purchased a number of DVDs and VHS tapes for them. The box in this photograph contains a set of Little House on the Prairie tapes that I ordered in August from eBay. Other DVDs I purchased for them included Seabiscuit (which I personally loved), The Waltons complete first season, and a Roy Rogers 10-show collection.

I purchased aftershave and a socket set for my Grandpa and pajamas for my Grandma. I didn’t do quite so well with my mother. She is hard to buy for, and I seldom know what to give her. She asked for a locking gas cap for her new car, so I ordered one from the Chevrolet dealer last week. I also purchased new gloves and a bath gift set for her, and I am giving her some photographs I have taken through the years of her two cats that recently passed away.

She and my grandparents will also receive copies of the calendar I recently completed, which features a lot of the photos from this site. So, that’s it. I ended up spending $150, which was more than I should have spent but less than I have spent in the past. Nicholas will purchase his family’s gifts tomorrow. He and I will delay giving one another anything until Valentine’s Day, provided we have more money then.

For me, there are many things that I want, but the main things that I want the most can’t be purchased, as is so often the case with the heart’s desires. But still, I’m thinking about writing a letter to Santa. If I can’t have the one thing that I truly want, why not go for a few pretty toys? I’ve been a good girl this year. Sort of. For the most part. Ah well, we’ll see.

Music of the day: Greensleeves by Loreena McKennitt