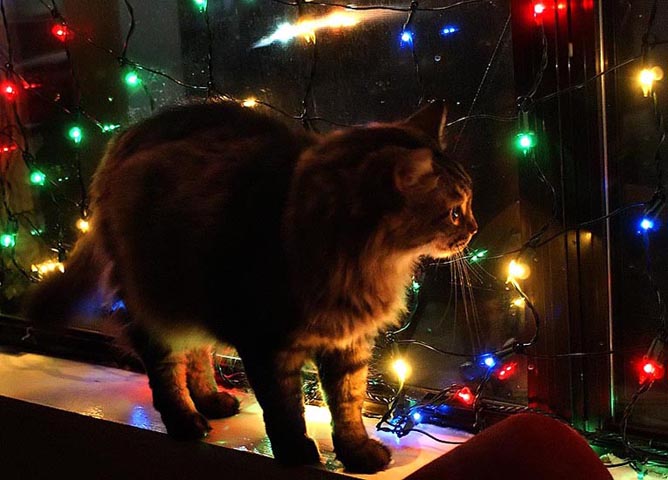 Wow, I have been really glum lately, haven’t I? No wonder I haven’t been shooting much…

In an effort to lighten things up a little, I thought I would post this shot of Boogie, taken last Christmas. He was moderately interested in the lights, but he was even more intrigued by the banging noises he heard coming from the bathroom as Zolby threw himself repeatedly against the bathroom door, demanding to be released from his temporary prison. Shortly after this, Zolby managed to open the door (it’s a Maine Coon thing) and came busting into the living room. The picture session was over as Boogie fled to the relative safety of the bedroom with Zolby on his tail.

Life with seven cats can be a real party sometimes, especially when they don’t all get along. Nevertheless, since Boogie is the “baby,” having been with me the longest, he gets anything he wants. I haven’t gotten around to decorating my window this year, but if I do, maybe I’ll try this shot again (I think I’ll clean the noseprints off the window first though).