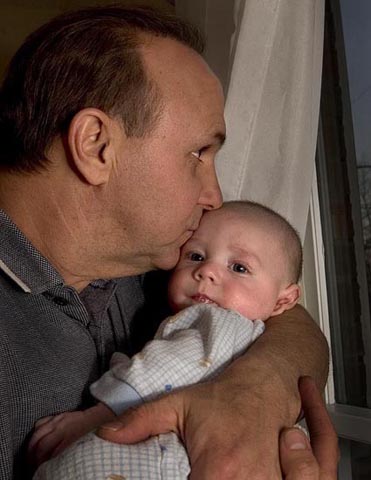 Sometimes things work out better than you expect. Sunday night I was standing on a hillside in Coker, feeling the 19-degree wind chill biting into my hands and crawling down my spine as I photographed an elaborately decorated home for a photo spread that ran in today’s paper. I was really enthusiastic about the project until the property owner refused to allow me to use his name or photo in the paper, stopping just short of asking me to leave his property.

Things seemed equally doomed Monday when I called the subject of the photo above to schedule a time to photograph him with his family as a special for the Associated Press to run in Newsday later this week. A former pilot, he had retired from the Army after serving 16 years of active duty, only to be among 5,600 retired soldiers recalled. After postponing marriage and fatherhood, he was to be deployed to Iraq three weeks before the birth of his first child. His attempts to obtain an exemption have so far been unsuccessful although he has managed to delay his deployment. His struggle has garnered nationwide attention and a bit of a media circus (in fact, I had photographed him in July for the paper), so it is understandable that he was less than thrilled when I called again.

Because it was a special assignment, my idea was to spend a few hours with the family, quietly photographing them as they went about their evening — eating supper, giving the baby a bath, cuddling while watching television, etc. That idea didn’t go over so well. After some hesitation, he finally agreed to let me shoot for 10 to 15 minutes and I made the appointment for this afternoon.

I think that in the limited time I was given, I managed to convey his fears for the future as well as his reluctance to be parted from his three-month-old son. I’ll transmit it and the rest of the take to AP tomorrow, so it should start hitting the papers by Thursday. Oh, and as for the Christmas light spread, I ended up with five photos in the paper today — including the one from Coker — so I guess it was worth almost freezing to death.

Music of the day: Sunflowers by Everclear