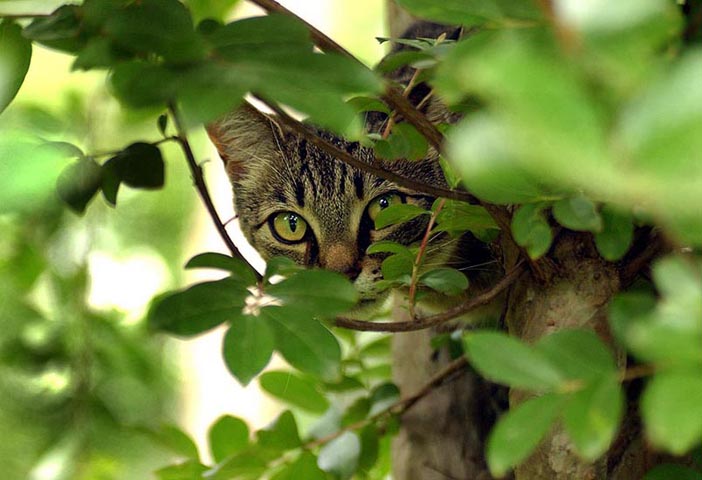 This cat photo was taken April 23, 2003, but I feel somewhat okay with posting it because — pause for dramatic effect — I just received my hardcover copy of the book in which it was published. Every year on New Year’s Eve, I make a list of goals. I don’t always write them down, and most of the time I don’t even tell anyone about them, but

Every year on New Year’s Eve, I make a list of goals. I don’t always write them down, and most of the time I don’t even tell anyone about them, but nevertheless I make them. Last year, one of my goals was to have a photograph published in a book, so here you have it — this photo appears on page 11 of The Wild Side of Pet Cats by Jo Waters. My name is listed in the acknowledgements. I thought it was going to be used in a textbook, but this is a book that may actually appear in a bookstore. It is already being sold at Amazon, but I decided to use the other link because it contains a photograph of the book.

As for the photograph, it was part of a series taken at a local resident’s house of her three cats, Callie, Black Baby, and this tabby, affectionately known as “Baby Sister.” It’s sort of funny to think of her nickname given the fact that her photograph was used in conjunction with a paragraph explaining how pet cats retain their wild instinct to hunt and hide. The photo caption explains how tabby cats have stripes that help them hide in the long grass or trees. Pretty neat, huh?