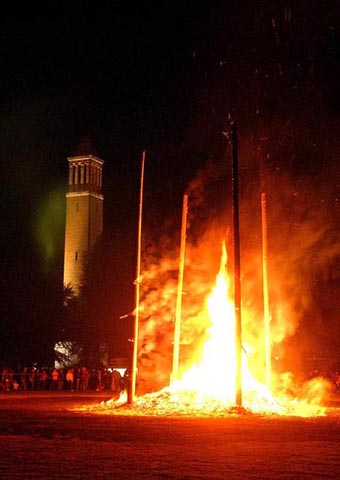 Yet Another Boring Bonfire

This is an image shot for the paper at last night’s bonfire for our local university’s homecoming. It took me too long to see the juxtaposition between the fire and the monument, and it took me even longer to make it through the people and get to the right spot to make the photograph. I think it was okay, but it would have been nicer at the beginning of the fire when it was huge. In reality, this shot would work better as two shots composed in Photoshop, but newspaper ethics do not allow that, so it wasn’t possible.

The problem is that the fire was so much brighter than the monument that I had to more or less blow the highlights in order to get the monument to show up. In addition, the D1H doesn’t handle noise very well, and I was at a pretty high ISO of 1600. If I had been less lazy, I could have at least used the tripod that I brought and dropped that ISO down to something more manageable, but I don’t know if that actually would have looked any better. I shoot this event almost every year, and almost every year I come away disappointed in what I shot. It is a wild, colorful, crazy event that the whole town looks forward to, but I never manage to capture that. Maybe next year.