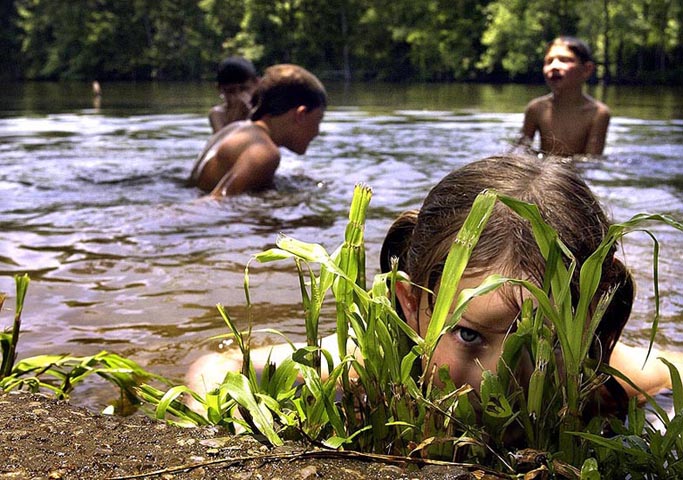 Since the multi-talented Alec Long at Shutter and Pupil was kind enough to inform me that photos from the past were welcome additions to traditional daily photoblogs, I thought I would throw this one in as my entry for this week’s Photo Friday challenge. The theme for this week is “Unexpected” and I can definitely say that everything about this photo was exactly that and more.

It started out as a routine assignment from the local daily, go photograph a group attending a crawfish boil at a nearby crawfish farm. It was a good story, especially since I was given the entire day to spend on it — a rare luxury in today’s deadline-driven, budget- conscious pressroom. Still, I never expected to make my favorite photo of the year there, let alone add an image to my portfolio. Nevertheless, that’s exactly what happened.

I set out with a little curiosity and not nearly enough caffeine on the morning of June 19, 2004, prepared to spend a few hours, learn a little bit, and maybe garner a picture package in the next day’s metro section. I ended up having the best day I had had in a long time, hanging out, talking with folks and just generally kicking back and enjoying the slow, leisurely pace of an old-fashioned Southern crawfish boil. While the adults huddled around the bubbling cauldron of salty goodness, the children romped and frollicked in a nearby creek, relishing their respite from city life.

In an effort to add scope to the day and bring back something a little different from the “typical” shots, I sat on the ground near the creek and started playing around with different angles. Before long, I was flat on my stomach, poking my wide-angle through the long blades of grass at the river’s edge, oblivious to the water that was seeping through my clothes and the chiggers that were enthusiastically burrowing their way into my flesh. When this little girl came swimming up to me, I could hardly believe my eyes. I held my breath as she drew closer and closer, afraid that any movement on my part would break the magic. With one snap of the shutter, the moment was gone and she was leaping out of the water, splashing and giggling with delight as she ran up the nearby hillside. It didn’t matter — I had my shot and I knew it was The One.

Ironically, it didn’t run with the photo package. It ran later that week as a small black and white standalone, garnering little notice. However, it ended up being the centerpiece of my portfolio and received more positive comments than any other photo during my recent job search.

It’s just a simple little shot with no technical artistry, no special light, no magic formula, but somehow I think it speaks to the jaded, world-weary adult in each of us and says, “Hey, remember me? Remember when you were happy and free and the whole wide world was laid open for you to explore? When did you get so serious, so uptight, so old?” When indeed.