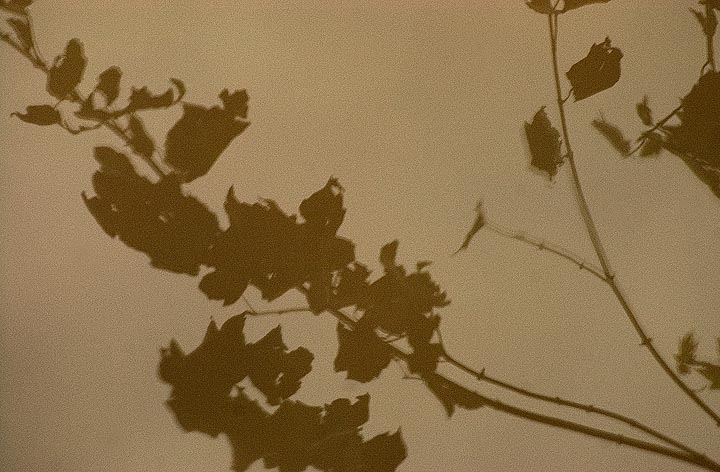 This photo sort of breaks out of the mold of what I normally shoot, and I haven’t yet decided if I like that or not. It was inspired by Photo Friday’s 2×4 challenge, which required shooters to go two blocks in any direction, then turn right and go four blocks, shooting whatever they found. Since I didn’t have a car, I broke the rules a little and went outside my door, made two steps forward and took four steps to the right.

What I found was less than inspiring at first. It was a cloudy, dreary day and there was nothing but wet cigarette butts, moldy leaves, and some shriveled up plants (a sure sign that I need to clean the area around my porch.) Upon closer inspection though, I noticed that the silver leaf maple outside my bedroom window was reflecting in a puddle so I decided to give it a try.

I kind of like the Japanese, Zen-like quality here but I would have liked to have achieved more of a true sepia effect. I tried to play around with the hue/saturation, but it really didn’t work so I more or less left it the way it was shot with just a few color tweaks here and there. The main thing that I learned was exactly the point of the lesson — that we tend to whine sometimes about having nothing to shoot, but the truth is that there are worthwhile things to shoot all around us, we just need to look at the world with fresh eyes sometimes.

Truthfully, I don’t think the image is all that great. I have another image that I will probably post tomorrow that I think was maybe a little better albeit not so “artsy,” but I think this one is more true to the spirit of the assignment. I went out feeling sort of blah and uninspired and I came in energized and excited about the possibilities. That’s a good trick to remember on the days when I don’t really feel like shooting.

I think I’ll try this technique more often if for no other reason than to break out of my mold and shoot something I might not ordinarily shoot.