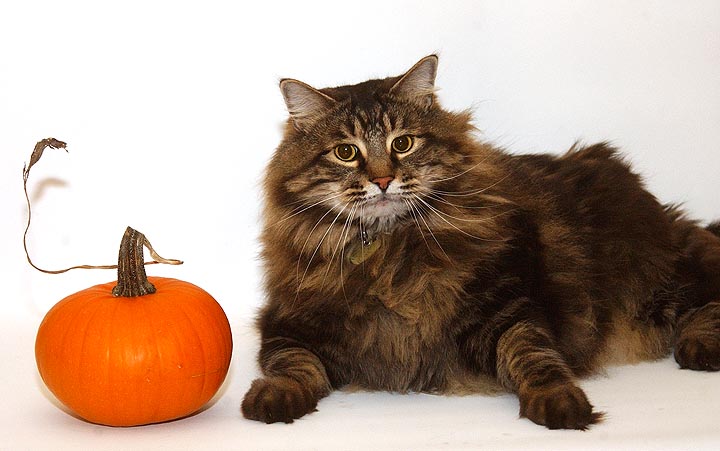 I had been saving this photo for Halloween, but I decided to post it today since none of my other photos turned out to be anything particularly outstanding. I try not to post cats two days in a row, but sometimes it’s hard when you live with a house full of photo opportunities. To say that Zolby was displeased with the whole photo session concept is an understatement. He growled and hissed his way through the whole thing. He wanted absolutely nothing to do with that pumpkin — hated it from the moment he laid eyes on it.

Of course, he hates most everything except for baskets of warm laundry, heaping bowls of food, and shoes. Yeah, that’s right. Shoes. If this pumpkin had been an old pair of boots, he would be the blissed out picture of utter contentment. His cantankerous personality, coupled with his passion for footwear, makes him a formidable opponent in the daily battle to see who actually manages to get dressed and out the door every morning.

I’ve learned the trick though — when he’s curled up happily on my shoes, I just wave another pair in his face, then casually toss them nearby for his inspection. He falls for it every time. Sadly though, he wasn’t about to be fooled by this bright orange orb. I’m not sure, but I think it may have been the most offensive thing he has ever seen. I can’t wait to show him what I have planned for the annual Christmas card. His whiskers may never be the same again.