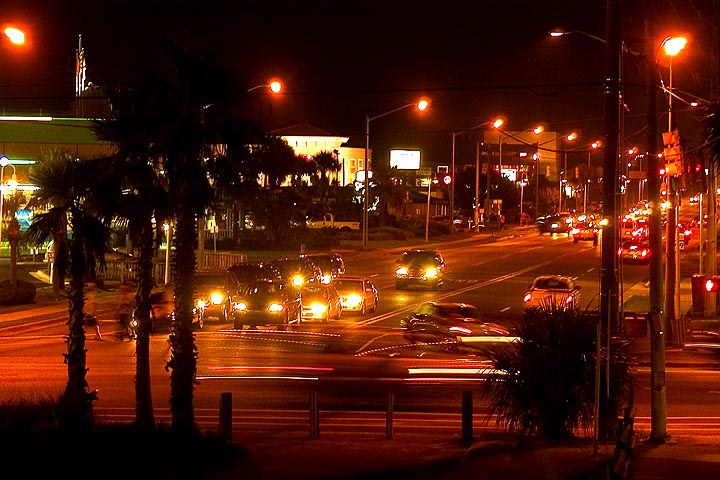 Even though this was originally taken in Gulf Shores on July 24, 2004, I thought it would be appropriate to post since Hurricane Ivan is currently bearing down on the coastline with a relentless fury. Here in Tuscaloosa, things are tense as well as everyone hopes for the best and prepares for the worst.

This photo was taken with a 1/5 second shutter speed at the intersection of Highway 59 and Highway 180 in an attempt to capture the hustle and bustle of the city’s nightlife. One thing I will always take with me from my time in Gulf Shores is the memory of people strolling the streets at night as fireworks lit up the sky from the nearby condos. Every night, without fail, this happened, a strange island celebration of life and happiness in this tranquil place. If I ever return, I think I will pack a few fireworks to bring with me so that I can contribute my own personal celebration of the day’s closing.

Update: Tuscaloosa has been spared for the most part, though a number of trees are down and many people are without power. Sadly, much of Gulf Shores is destroyed. Some of the damage can be seen by clicking here. I’m glad I got the chance to see it. It’s hard to believe that I was actually there just two months ago. Residents and business owners say they will rebuild by next summer, and I hope so, but I can’t help but think maybe that’s a little optimistic.