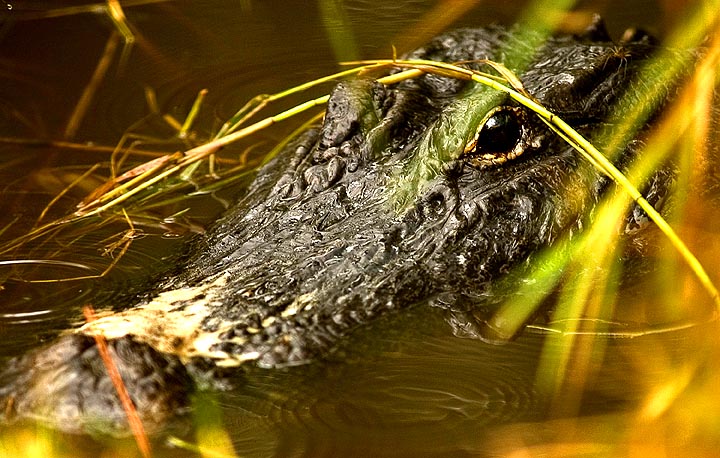 Continuing the trend, I decided to post this photo of an alligator peeking through the grass along Mobile Street at the Bon Secour National Wildlife Refuge in Gulf Shores July 26, 2004. It was thrilling, and more than a little scary, to be so close to a real alligator in the wild. The odd part is that I had made the long trek through the refuge the day before hoping to find an alligator, but to no avail. I had wandered all along the Gator Pond at dusk, camera in hand, hoping to capture the massive creatures, but had come up empty-handed.

The next day, I noticed a car pulled up alongside a ditch, the occupants eagerly peering out their windows and into the murky depths. As I neared them, the driver motioned excitedly to the water. Sure enough, it was an alligator. At first, I was afraid to get out of the car, but curiosity got the better of me, and I soon walked within about three feet of his massive jaws as he kept a calm but wary eye upon my presence. The moment was almost sacred but ended all too soon when a carload of Tennesseans stopped and a father and two sons clambored out. Bored by the gator’s placidity, they poked at it with sticks and began throwing rocks into the water as it snorted and blowed in their direction. Sickened by their display, I turned away, silently hoping he would exact his revenge upon them, or at least frighten the wits out of them.

The next day, I visited the Gulf Shores Zoo and saw another alligator lying motionless in a small pool. The nameplate on his pen said “Chucky” and I wondered if he was named after the horror movie character. Even though his information indicated that he weighed 1,000 pounds and was 12-feet long, he certainly didn’t seem frightening — he looked dead. I felt sorry for him lying there so still and lifeless, a victim of our society’s morbid need to cage and classify, scrutinize and dismiss.

It turns out that old Chucky had more life in him than I thought — he escaped from the zoo during the hurricane. I hope that he remembers how to survive in the wild, and I hope that somewhere out there he is laying in a weedy canal alongside a big girl alligator, marveling at his unexpected freedom.