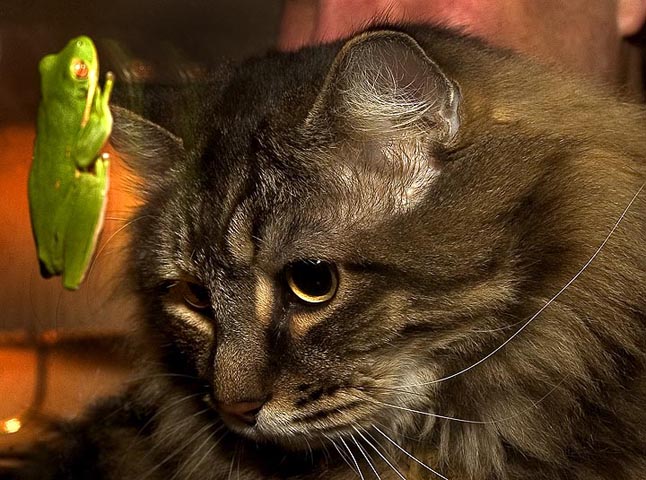 Because my cat Zolby is so photogenic, he frequently ends up on the opposite side of my lens. In this case, I had returned home late one night after shooting a party for a magazine. I was a little dejected, keyed-up with nowhere to go and nothing to do. I wasn’t really ready to go home, but there was nothing else to do. As I walked up onto my porch I saw a strange sight….this vivid green frog attached to the window. Ordinarily I wouldn’t have given it a second thought, but I was in the mood to keep shooting, so I was ready to jump on any excuse, even if it was slimy and green.

When Nicholas held Zolby up to the window to see the frog, I shot the photo. I think it would have been better if he had actually been looking at the frog, and I’m not sure I made the right choice in focusing on Zolby instead of the frog, but it still made a fun picture. As for Zolby, he lost interest in the whole project rather quickly, as did Nicholas. As for the frog, he leaped off the window when I poked him in an attempt to make him spread his legs. Serves me right — photojournalists should never try to manipulate their subjects.