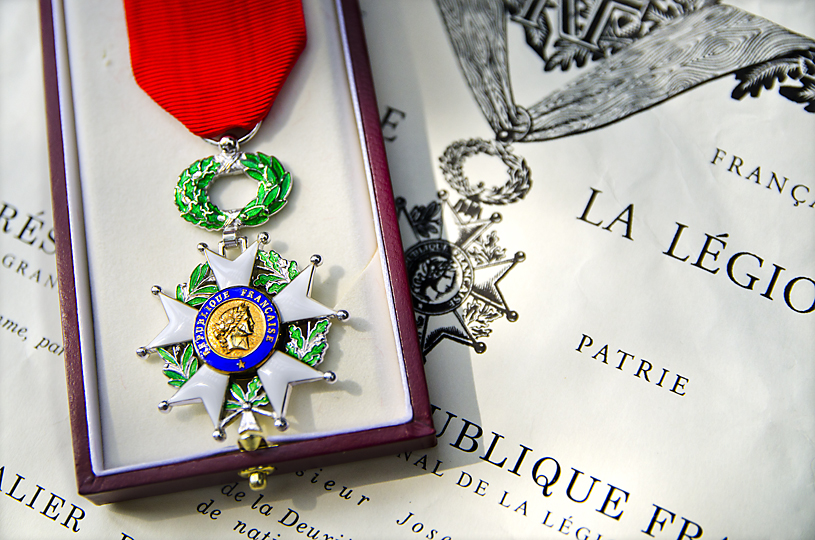 Joseph Thompson never understood why his family and friends believed he was so special, so worthy of such an honor. The way he saw it, all he did during World War II was avoid getting shot. He couldn’t imagine why anyone would present him with an award when his greatest legacy — the achievement for which he was most proud — was the living, breathing embodiment of the values in which he believed and the way he tried to live.

But the French government didn’t see things the way he did. From the French point of view, Thompson, along with nearly 10,000 other Americans, risked his life to secure their liberty from the Germans, who occupied their homeland from 1940 until 1944. That was at least worth something — more than something, they felt.

And so, they awarded the Caledonia native with their country’s highest military decoration, the Legion of Honor, making him a chevalier, the equivalent of a knight.

It arrived too late. Thompson never got the chance to open, with trembling hands, the slender burgundy box. He never held the heavy insignia bearing the words: “Republique FranÃ§aise.” He passed away March 3, months before the award arrived.

But it wouldn’t have mattered.

Though he would have been pleased, he would have been most proud of his three grown children, who stood Saturday with their mother, Jo Thompson, in the columbarium at First Methodist Church in downtown Columbus and spoke of their lives and the role he played in shaping them into the people they are today.

There is Angie Abbott, the oldest, who now lives in Clinton. She was precocious as a child, always testing authority. But she knew, without a doubt, that her daddy loved her, even when he sometimes seemed too strict. She grew up to become a teacher, retiring after 35 years.

There is Vernon Thompson, the middle child, now a resident of Anniston, Ala. and a retired defense contractor.

Then there is Jim Thompson, the youngest, now a retired engineer from GM Delphi in Athens, Ala. — the baby Jo Thompson went to her husband and said she wanted after their second child entered school.

“Alright,” she recalled him saying, “but we can’t have a baby every time one goes off to kindergarten.”

That was his way, family members and friends said Saturday. No matter the situation, Joseph Thompson found a way to bring a humorous spin to it. It is a skill he passed on to his children, and they were in fine form during the memorial service, laughing a lot, crying a little, and sharing memories as they finally laid his ashes to rest in the church’s memorial garden. He dedicated his body to science.

All he wanted, throughout his life, was to see them grow up to love others, be active in their churches and use their gifts and talents to give back to the world.

It was something he talked about often. It was something he mentioned once more on his dying day. He didn’t live to see the prestigious medal from France. But he lived to see his children fulfill his life’s dream. And that was enough.

Now, they find they want the same things of their children. They hear themselves telling the same stories, imparting the same timeless wisdom.

Angie Abbott was teaching on Sept. 11, 2001 when the planes crashed into the Twin Towers and the world forever changed. She did the only thing she could think of: She called her daddy.

“What do we do now?” she asked, lost and grieving with a nation that suddenly found itself at war.

“The price of freedom is not free,” he told her. “The next installment has come due.”

It was always that way — the children turning to their parents for comfort, for guidance, for footsteps to follow.

Vernon Thompson used to literally try to follow in his daddy’s footsteps, trying to mimic the way his father ran up the stairs at home, sometimes taking them two at a time, never tripping, never faltering.

For many years, he couldn’t do it. But he wanted so much to be like the man he admired that he endured the skinned shins until he could take those steps just as easily.

Jim Thompson holds a quieter memory — the image of his father in the early hours, sitting by the window in the den with a cup of coffee, either writing his Sunday School lesson or working on the New York Times crossword puzzle — in ink.

No matter what he was doing, he always welcomed the sleepy toddler, letting him crawl into the chair beside him and lay his head in his lap, softly scratching his youngest son’s back as the child fell asleep again.

Joseph Thompson never talked much about the war, not until the later years, when it seemed to spill out of him with some urgent need to convey the lessons it, too, had wrought.

The hardest thing to accept was the events of Christmas Eve, 1944. He was a first lieutenant, scheduled to travel across the English Channel to Cherbourg, France with his unit, the 3rd Battalion, 262nd Infantry, 66th Division, also known as the Black Panthers, and the 264th Infantry.

At the last minute, he was pulled away, sent on another assignment. That night, as the ship crossed the Channel, it was hit by a German torpedo. More than 750 of the 2,235 men aboard perished in the icy waters.

Thompson wondered why he was spared when so many good men had to die. It was a question he asked all the time.

But to his friends, his children, his wife, the answer is obvious. Through the life he lived, the example he left behind, he changed the world.

There is no Bronze Star for fatherhood, though he earned one for his service to his country. There is no Legion of Honor medal for a husband who lets his wife know, every day, beyond a scintilla of doubt, that she is loved. There is no medal for quietly living a life according to one’s principles, seeking the approval only of God, loving all, harming none, enjoying each day as if it were the last.

But the love he left behind marches on.

The late Joseph R. Thompson’s Legion of Honor medal rests on the certificate he received from the French government for his service during World War II. Thompson is among more than 10,000 Americans who have received the distinction. His family and friends gathered Saturday at First Methodist Church in downtown Columbus for a special memorial ceremony celebrating his life. (Photo by Carmen K. Sisson/The Commercial Dispatch)