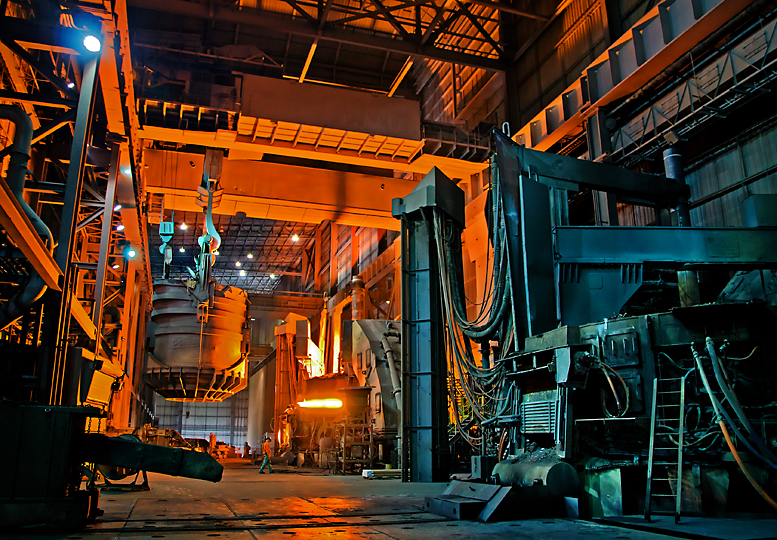 The hours are long, the work is hard and the days are exhausting. But the pay is good, and there’s a point of pride in holding one of the most coveted manufacturing jobs in Lowndes County — wearing the inscribed, dark blue hard hat of Severstal Columbus.

That pride was evident Saturday morning as employees Anthony Donaldson and Johnnie Bates, both of Aberdeen, talked to their wives, Dorothy Donaldson and Tiny Bates, about the job that keeps food on their tables and shoes on their children’s feet.

The two couples were among many Saturday who took advantage of the company’s “Family Day” festivities, which included a two-hour tour of the 1-million-square-foot steel-making facility that sprawls across 1,400 acres near the Golden Triangle Regional Airport.

Outside, children had their faces painted and bounced themselves silly on a multitude of colorful, overstuffed inflatables, while inside, spouses of Severstal employees donned orange jackets, plastic goggles, blue and yellow disposable ear plugs and white hard hats, preparing to enter an entirely different world — one which many had never seen.

The tour started off with a bang, quite literally, as viewers witnessed one of the flashier aspects of the metallurgical process — watching scrap metal enter a 3,000-degree Fahrenheit electric arc furnace to be melted and converted into steel.

As the furnace blast reached a crescendo and flames shot toward the ceiling, scattering sparks across the concrete floor, bystanders — many wielding iPhones and pocket cameras — stepped back, then drew close to the yellow barrier once more, riveted by the process.

Both Donaldson and Bates work in the hot mill section of the $1.4 billion plant, and they said they appreciated the opportunity to show their wives what they do.

“You have to come to see it yourself to understand the whole process,” said Johnnie Bates, a mill tech who admitted loving his department and even enjoying the “intense” 12-hour, four-days-on, four-days-off shifts.

Tiny Bates, who works as a zone manager for MTD Products in Verona, listened carefully as her husband pointed out different parts of the plant, explaining each step of the process over the din.

“I think it’s amazing — and dangerous, at the same time,” Tiny Bates said. “It’s exciting. Now that I know what he goes through, I can appreciate what he does.”

Dorothy Donaldson, a home decorator, had a similar reaction.

“It makes me appreciate my husband, because I see what he has to go through,” she said.

“I’m going to have him a hot meal every evening when he gets home, from now on,” one of the women quipped.

‘One grade above the rest’

Though the Columbus plant opened in 2007, this is only the second time it has hosted the Family Day, which company officials described as part appreciation and part celebration.

With Phase 2 expansion currently underway and slated for completion in December, hopes are high that the market for steel will remain strong as the company prepares to double its production by 2015 to 3.4 million tons per year.

The addition of the recently completed push-pull pickle line and a second hot-dip galvanizing line will make it possible for Severstal Columbus to solicit business from other players in the steel market, notably automakers and the pipe and tube industry, said Vice President and General Manager Wilbur Winland Saturday afternoon.

Recently, Severstal’s operations at its North American headquarters in Dearborn, Mich., began supplying rolled steel to South Korean automaker Kia Motors Corp. for use in the front roof panels of the latest model of the Kia Rio. The Dearborn plant is also supplying rolled steel for similar uses in Hyundai Solaris sedans and hatchbacks.

Supplying the automotive industry’s needs was the intent from day one for the Columbus operations, Winland said, and every aspect of the plant has been built from the ground-up to meet that goal.

“If you notice the automotive industry, the new transplants are currently building plants down here in the South, and we’re centrally located between all those types of facilities,” Winland said.

Thanks to a healthy transportation system which utilizes rail and barge export, Severstal Columbus is also poised to supply steel to Mexico and South America, he added.

As production ramps up though, one thing casual passersby will not see is any tangible evidence in terms of smoke, noise or pollution.

“We’re one grade above the rest,” Winland said. “We try to run one of the most modern plants — technically sound, with some of the best-trained employees in the country. We try not to be noticed too much. … The steel industry gets a lot of bad rap, but we’re a very modern facility, very careful environmentally and want to be good neighbors.”

One thing people will notice is an influx of jobs, Winland said, not just from the local plant but also from secondary suppliers and other sectors, running the gamut from retail to real estate.

Severstal currently employs roughly 635 people, with 100 of those jobs resulting from the Phase 2 expansion. An additional 50 employees are expected to be added over the coming months.

The jobs, which are filled through the WIN Job Center in Columbus, require only a high school degree and can pay as much as $78,000 per year with benefits. The majority of the Severstal Columbus workforce — around 85 percent of the employees — had no previous steel-making experience.

But for every employee, an additional six to eight employees are needed outside the plant, Winland said. From scrap dealers to sales clerks, new jobs are created every day to support Severstal’s growing operations.

“It’s a really nice opportunity for the area,” he said.

Even as Columbus benefits from Severstal’s presence, so, too, the company’s newcomers to the area benefit — not just from the job, but from the friendships they are making as they build ties in their new hometown, said Goad, who moved here from northern Indiana with his wife and 2-year-old son.

“I just fell in love with this place,” he said. “The community has been overwhelmingly welcoming to us. This is one of the most advanced steel mills in the world, and to be a part of that is just exhilarating.”

While the Severstal “family” celebrated its victories Saturday though, one loss was not forgotten — the absence of Vice President and Manager of Operations John Bell, who passed away Sept. 24.

Saturday, Chief Executive Officer and President Sergei Kuznetsov took time to speak about Bell’s contributions to the company and the re-naming of Airline Road, which runs in front of the plant, to John Bell Way.

“The loss of John has been tough,” Goad said. “He was a wonderful, wonderful man, and he definitely will be missed in Columbus. … John was such an integral part of the success of the startup of the facility, and now he will forever be a part of it.”

A 3,000-degree Fahrenheit electric arc furnace prepares to receive a “charge” of scrap metal for conversion into steel at Severstal Columbus, Oct. 22, 2011. Employees’ families got an inside glimpse of the entire metallurgical process during an open house and tour of the plant’s one million square foot facilities Oct. 22, 2011, during “Family Day.” (Photo by Carmen K. Sisson/Cloudybright)