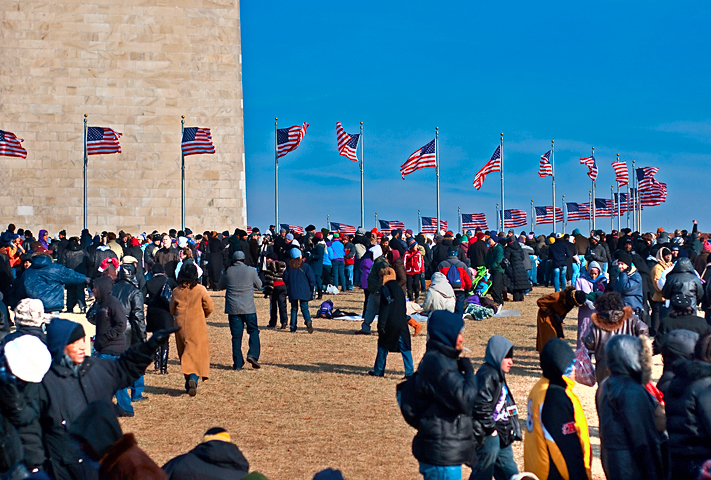 It was so cold that Jan. 20, so cold I wanted to be anywhere but standing in the National Mall in Washington. I’d fought my way through the press of thousands of people, walked more miles than I had soles on my shoes, gotten lost so many times I thought I’d never reach my destination, but suddenly it was there — the Washington Monument.

It took my breath away, the sight of this stark white monument set against a vivid blue backdrop, towering above a ceaselessly undulating human rainbow. A circle of flags surrounded the monument, and the frigid wind whipped the flags back and forth. Though it was 22 degrees, the windchill was eight. At that moment, I didn’t care.

I suddenly understood why this had meant so much, why people had traveled thousands of miles, endured what at times felt like the Washington version of the Bataan Death March, just to be here. Whites stood amongst blacks. Young people smiled and offered blankets to children and the elderly. Someone passed around a package of hand warmers, and people gratefully selected a pair and passed the bag down the line. I had two extra pair in my pocket. I gave them to two little boys next to me.

No one grumbled about being so far from the large-screen monitors that they could barely hear Obama, couldn’t see him at all. No one griped about the long wait or grumbling stomachs. There were no headphones jammed into ears, no half-present-but-mostly-not teenagers swaying to their own beat. There was no discord, no derision.

Instead, for a few hours that miserably cold, unforgettable day, people hugged one another. They sang songs. They held hands. They listened. They laughed. They hoped. They believed.

And then we all went back to our hotels, drowned ourselves in hot coffee, and began a petition to move the 2013 inauguration to Miami.

Music: Sacrifice by Theory of a Deadman (lyrics)