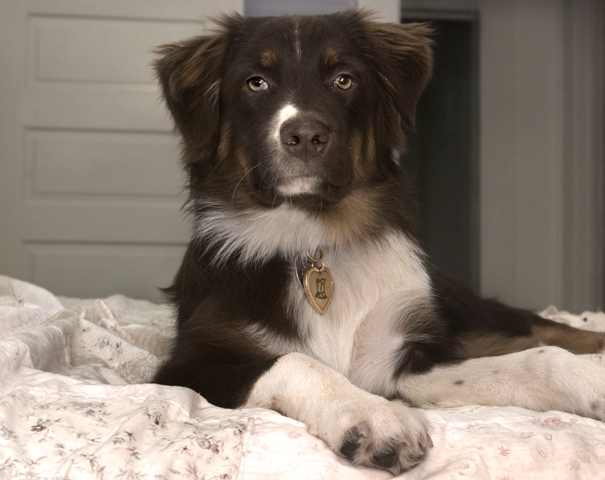 Friday will mark yet another milestone in Cowboy’s development — he’ll turn five months old. It’s hard to believe I’ve shared 11 of those 20 weeks. It seems like only yesterday that I was driving him home in the pouring rain, this wriggling secret huddling in my lap, head on my shoulder as the rain pressed in from all sides.

I didn’t tell anyone I was going to get him. Not my mama, not Nicholas, not my WT. No one. I knew what I wanted, and what I wanted was this puppy — sight unseen. I already loved him. There was no question I was bringing him home. I paid the family in Forkland $125 before I ever laid eyes on him. And when he leaped into my arms, muddy and licking my face, I knew it was right.

He’s growing tall now, gangly in that way all teenagers are. Legs, body, and nose all too long, lending him a lean, fast look. And he IS fast. On our evening walks, he races in wild, joyous circles through the grass, making me dizzy — mostly with laughter.

He’s putting on weight rapidly now, weighing around 45 pounds, or so the vet told me last week when I rushed Cowboy to his office because I’d been playing tug of war with him and had inadvertently yanked some of his teeth out. The vet was kind enough to not laugh at me (or charge me) as he smiled and opened Cowboy’s mouth. My kid is teething, rows of gleaming white molars punctuated by gaps where new little teeth are just breaking the surface. I was terribly proud of him, though I have no idea why.

His ears are becoming soft and feathery, the hallmark of a true Aussie. His coat is darkening and becoming multi-layered —lustrous, water-proof overcoat, feathered undercoat. He’s settling down more, showing more “eye” — a herding instinct that involves staring intently at moving objects, dropping to the ground and slinking, never taking his eyes off the object. It’s a natural behavior in good herding dogs, allowing them to round up sheep or cattle and keep them g0ing in the right direction. It’s a beautiful, and incredibly powerful, thing to see. Nature over nurture. It stuns me.

Life is topsy-turvy with a puppy, and I’m surprisingly laid back about it. At the moment, he’s barking and chasing a frisbee around my office, trying to turn it over. The oriental rug is white with remnants of a magazine he dug out of the garbage and destroyed. My desk has teeth marks, as do the chairs, coffee table, windowsills and door frames. So what if I painted them pristine white last summer? It’s not a perfect house. I’m no longer trying to live the Martha Stewart life I once admired. I’m calmer. Steadier. I take life easier. I’ve finally accomplished what Carey once said was his greatest wish for me — to be neither drowned nor swept away by life’s currents, but to learn to become one with them and let them flow through me, over me.

Tomorrow perhaps I’ll post another of Cowboy’s favorite things — lying in bed with me. He’s a great comfort, a rebellious challenge, and a day filled with laughter, snuggles, and doggie kisses. I set out to make his life the best, happiest, most beautiful life a dog could have. But in the end, it was my life he made better.