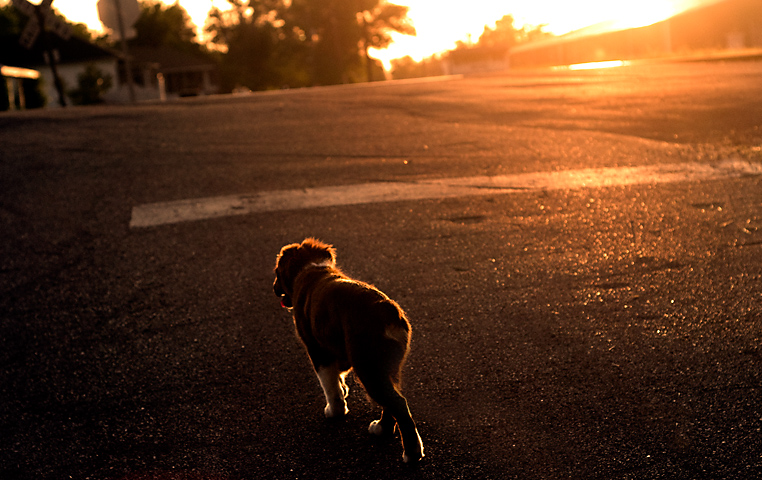 We walked in apologizing. Well, I was apologizing. Cowboy was too busy wrapping his leash around my legs, no doubt practicing his future skills as a calf roper. His first day of puppy kindergarden and we were 20 minutes late. I didn’t have the guts to tell them vanity was to blame. I’d washed Cowboy so he’d be pretty and smell like something other than the road kill he’d rolled in earlier. Since he wouldn’t tolerate the hair dryer, I’d taken him on a long walk in the afternoon sunshine, hoping he’d air dry. It’s easy to get sidetracked walking him. Everything he sees is exciting to him, and everything that’s exciting to him is exciting to me.

We managed to make it to the circle of folding chairs without further incident, and I took my seat. Cowboy promptly knocked the miniature Daschound next to him on its back and laid down on it as it squealed. Can’t say I blame it. Its two pounds was little match for 24 pounds of muscular Aussie. Embarrassed, I pulled my dog away and apologized to the prim girl in the neat twin set. She nodded and pulled her dog closely around her Mary Jane-clad feet.

The instructor was telling the group that I’d been clicker training Cowboy, something that’s rarely done here. She said most people prefer traditional reward/punishment training because clicker training requires fast reflexes, absolute spot-on timing, and the patience to repeat lessons until they’re bomb proof. She said most people get a dog, teach it a few commands, and shrug when it doesn’t respond. The group was new to this style of positive reinforcement, so naturally they invited me to demonstrate.

I fished my clicker from my pocket and looked down at Cowboy. He was removing a fat red wallet from a woman’s purse. I had told him about money concerns on our walk this morning, idly chatting about the things on my mind, but I didn’t know he’d take it so seriously. Smart little fellow, this dog of mine. I grabbed the sodden wallet from his jaws and handed it back to the woman.

“Cowboy has been clicker training for three weeks now and knows “‘Sit,’ ‘Come,’ ‘Watch Me,’ and ‘Stay,’” the instructor announced.

She seemed so pleased, I almost congratulated her training skills when I remembered: I trained him. I smiled smugly and led Cowboy to the center of the circle, clicker in one hand, Meaty Bones in the other. I’d worried Cowboy would get stage fright or experience performance anxiety, but he was busy talking smack to a scruffy white poodle.

“Show us,” the instructor urged. The members of the circle nodded encouragement.

Hello, my name is Cowboy, and I’m a herdaholic.

I waggled a treat beneath Cowboy’s nose, and he sat. The group clapped madly, as if he’d just traced the alphabet with his nose. I knew the truth. The only reason he sat was because I’d held the treat above his head, then lowered it, forcing an automatic sit that had less to do with obedience than basic kinetics.

“Stay,” I commanded, backing away. Cowboy leapt across the circle and skidded to a halt in front of me, barking furiously. The instructor’s brow furrowed. “He’s a little excited tonight,” she said.

Um. Yeah. You could say that.

“Why don’t we break into small groups now and work quietly with our dogs?” the instructor said, mercifully sparing me further embarrassment.

I dragged Cowboy to the farthest corner in the room, watching in wonder as, one by one, each dog sat, begged, rolled, and played dead on command. One dog even walked on a teeter totter. I turned my back to the room, shielding Cowboy from distraction. He poked his nose between my legs and barked at Teeter Totter Dog.

Cowboy sat down and energetically licked himself, reaffirming his manhood. Not wanting to interrupt important business, I occupied myself by watching the instructor lead the mini Daschound into puppy pushups as everyone oohed and awwed. I had to admit, it was pretty adorable. The Cutest Puppy in the World sat straight up, tail wagging its entire body, then it slumped to its tummy, stretching its back legs behind it.

I looked at Cowboy. He seemed finished with his ministrations, so I issued my command.

I looked around to see if anyone had witnessed my adorable pup’s intelligence. They were too busy tossing balls to their dogs and laughing as the puppies tripped tails over heads with enthusiasm.

“Alright, I’m going to come around the room, and each of you will issue one command of your choice,” the instructor said. “When your dog executes the command, he can go off-leash and play.”

Cowboy strained at the end of his tether, eying the French Bulldog with the pink, jewel-studded collar.

“She’s out of your league,” I muttered.

At least he should earn some points for congeniality. He licked and jumped and woofed and rolled for the instructor. But he didn’t sit. Or come. Or stay. Or watch me.

“When you complete your command, you can play,” the instructor said, cupping his chin in her hands as he tried to wrestle himself from her grasp. He shook his head once, then twice. FREEDOM!!! He yanked the leash from my hands so abruptly it almost took a finger with it.

“I think he’s ready to play now,” I said in my best matter-of-fact tone. The instructor nodded and hurried away, relieved to turn her attention to another well-behaved country club dog. I closed my eyes, pressing my fingers tightly against my brows. My head hurt.

Oh god. I didn’t have to look to know this involved my dog. He is a Cowboy after all. Women gravitate towards him like fleas. I crept to the center of the room and stopped. The beautiful, cream-colored French Bulldog was standing completely beneath Cowboy, his nose smashed into her perky little butt, her mouth affixed, well, exactly where the little boy said. Ewww, indeed. How dare they allow my dog to be molested by a Parisian whore.

Cowboy took two steps forward, and the bulldog walked in perfect sync. He stepped right, then left, in a doggy fox trot. She gave new meaning to the expression, “Holding on like a bulldog.”

“He’s not old enough yet, and neither are you for that matter, missy,” I hissed, scooping my wriggling, panting dog into my arms. When things looked safe, I let him down again and began talking to the instructor about attention issues.

“He’s got my ball!” a shrill voice screamed. “Cowboy stole our ball!!!”

Oh Christ. Round and round the room he raced, flopping down like the tease he is before charging off again. As he sped past me, I threw myself on top of him. Or at least that was the plan. The linoleum was cool, and I pressed my burning cheeks against it for a moment as Cowboy flung himself against the kid screaming the loudest and knocked him to the ground. I glanced at the clock on the wall. Only 10 more minutes. How much worse could it get.

A large pool of yellow seeped around Cowboy’s feet as he held the boy’s tennis ball aloft, grinning a triumphant doggy smile.

I forced the ball from his jaws and returned it to the kid, who was huddling against his mother’s legs, crying. Then I quickly sopped up the mess with paper towels, hoping the instructor had missed this faux pas. She hadn’t.

“I think we should see if any of the dogs would like to try the high jump,” she said, gesturing at a PVC pipe resting on stakes a foot from the floor. I scoffed. Jump. Cowboy could step over hurdles like that all day long.

“Let’s line our dogs up and toss the treat over. They’ll jump naturally.”

Everyone dutifully dug treats from their pockets. My treats were melted into mine. Note to self: Choco-Drops are not M&Ms.

I wiped my hands on my pants and looked up. The entire pipe structure was lying on the ground, and Cowboy was dragging it across the floor, just one more big stick to play with as he does on his walks. I didn’t even bother to stop him this time. I just sat down on the floor, back against the wall, and watched as the others chased my brown and white streak around the room. Cowboy was having a great time. The running children had awakened his prey drive, and he dropped the pipes, chasing the toddlers happily, nipping at their heels and leaping to nip them on the butt when they slowed. After he’d herded them efficiently into the corner, he stopped and sat down, guarding his flock.

“What a good sit! Good boy!!” the instructor said. Her clothes were askew, her apron of treats dangling dangerously from her hip. Wearily, I pulled myself to my feet and latched Cowboy’s leash, pulling him towards the wall so the children could return to their baffled parents.

“What’s the matter?” I wanted to ask. “Doesn’t YOUR dog know how to send a kid to the corner and keep him there?”

When at last the room was empty, no one left but me, the instructor, and my hellion, I tried one last time.

“Sit.” Cowboy stood up and yawned.

“Stay.” Cowboy rolled over on his back and whined for a tummy rub.

“Watch me.” Cowboy stared at a spot on the wall above my head, no doubt listening to the sound of a fly somewhere in a five-mile radius, slowly buzzing its last breath.

“He’s very high energy,” I said to the instructor. “He’s smart and gets bored quickly when the lesson’s too easy.”

Quietly, she handed me a few obedience books.

“These might help,” she whispered, backing away. I thanked her and went to retrieve my dog. What I saw next absolutely blew my mind. There, in the corner with his back turned, my dog was happily eating — crayons. One of the children, no doubt a kindergardener himself, had left them behind. I swept Cowboy’s mouth clear of “Burnt Sienna” mixed with “Spring Green,” and dragged him to the car.

“Saddle up,” I demanded, and he jumped in, still licking his lips. By the time I reached the highway, my canine cannonball was sound asleep. His first day of school had clearly taxed his 12-week-old limits.

“Ah well,” I said, scruffing his head. “At least you didn’t eat the glue.”

Music: I’m Gonna Buy Me a Dog by The Monkees (lyrics)