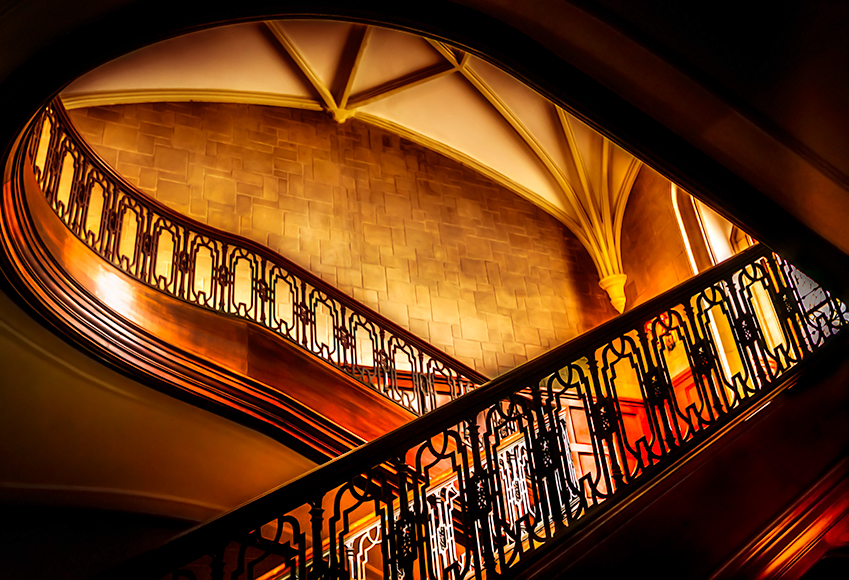 The shape of things to come

[Note: Thanks to everyone who voted for this image in the Photo Friday “Architecture” Challenge (09-04-14). I’ve missed all my photoblogging friends, and it’s great to be back. Feel free to drop me a line and say hello.]

At the end of May, I went to Atlanta. In the middle of June, I almost died there.

It was a routine night. I had been feeling bad for a few weeks, but I chalked it up to poor eating habits and erratic sleep patterns. I napped for much of the day on June 18, but by nightfall I finally felt well enough to sit at my hotel desk and edit some of the pictures I’d shot the day before for the DeKalb County Convention and Visitors Bureau. I went out for a hamburger and returned to my room, intending to work well into the night.

Instead, I laid down and fell asleep. I woke up gasping for breath, choking as my bronchial tubes clamped shut. Unable to speak to call 911, I panicked and stumbled to the hotel lobby, but at 2:30 a.m., the doors were locked.

The last thing I remember is my fingers sliding down the glass doors as I soundlessly cried for help.

I woke up in Emory University Hospital’s ICU with a tube down my throat. The hotel’s front desk clerk had found me on the floor, unconscious, and made the 911 call I was unable to make. Emergency room doctors, unable to get oxygen into my body, decided to intubate, which probably saved my life. After a three-week stay at Emory, I was finally able to come home.

And so, here I am, celebrating my 41st birthday doing what I love best — editing pictures.

I didn’t see a white light or a tunnel. I didn’t hear God’s voice or the beat of angels’ wings. There were brief moments when I was able to hear my rescuers, but I couldn’t feel their hands, and I wasn’t sure if my eyes were open or closed. I couldn’t speak, but I could hear. It turns out that hearing is the last sense to go before your body shuts down and your life slips away.

It was an enlightening experience, and one I won’t soon forget. I was released on the Fourth of July, and there was something incredibly moving about driving away from the hospital, away from death, and heading into a cascade of fireworks over downtown Atlanta. I felt happy. Newly alive. Profoundly lucky.

It’s been a while since I’ve written here. I tend to dole out my words to Facebook, Twitter, and Instagram, leaving few crumbs to throw here. Since the photoblogging craze hit its heyday and vanished, I find myself less inclined to post. But this site has meant — and continues to mean — a great deal to me, so I post into the void anyway.

The one thing Atlanta solidified for me was a long-held desire to complete a nonfiction book I’ve been mulling over for the past year or two. It will take me on a journey from Jacksonville Beach, Florida to Van Horn, Texas, and with any luck, it will be as much of a life-changing experience as the Atlanta trip was for me.

Without the almost dying, of course. I’d like to postpone that for a while.

An ornate staircase leads to the upper floor of Callanwolde Fine Arts Center, which is housed within a 27,000 square foot Gothic-Tudor Revival mansion and nestled on 12 acres in Atlanta, Georgia. The house, built in 1920, was the home of Charles Howard Candler, son of the founder of the Coca-Cola Company. The house was designed by architect Henry Hornbostel. Today, Callanwolde operates as a non-profit organization devoted to teaching and promoting the visual, literary and performing arts. (Photo by Carmen K. Sisson/Cloudybright)